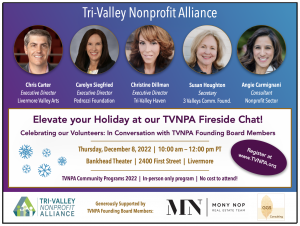 There’s no better time to be thankful and to show appreciation than the holidays!

We invite you to join TVNPA for a festive gathering and “fireside chat” on the importance of thanking your volunteers and incorporating their experiences into your nonprofit organization’s storytelling.

Volunteers get it! Volunteers give their precious time and resources because they believe in the mission. Volunteers experience impact firsthand! There is no better way to thank them than to capture and share their stories so that others may learn of the benefits of your organization’s critical work.

We’re inviting a handful of TVNPA’s founding board members back to the Bankhead Theater to share their stories of being motivated to join a hardworking team of volunteers to help carry out a collective vision, along with how they motivate volunteers to step up to the plate and join the team.

Let’s celebrate the spirit of the season together in all our diversity! Take this opportunity to show off and share your favorite personal holiday accessory or festive attire. The event also features singing holiday favorites with our very own Chris Carter on guitar. And—of course!—we’ll enjoy cookies and tasty treats in TVNPA’s annual year-end tradition.

This December’s Community Program will be held in-person only at the Bankhead Theater, and we promise you won’t want to miss it! Join us at 10:00 am for networking, coffee and snacks. Program starts at 10:30 am.

We look forward to seeing you all there!

Angie Carmignani brings more than 20 years of experience in nonprofit leadership to the Tri-Valley. Previously, Angie served as the CEO for The Taylor Family Foundation—an organization in Livermore, CA, that preserves the wellness of Northern California children living with life-threatening illnesses and chronic diseases.  Her tenure there began as Operations Director, helping to manage and grow their programs, including a residential summer camp program famous for the experiences had by all who attend.

Laser-focused on  the day-to-day management and foundation operations, as well as growing the foundation from two wellness programs to seven. Angie strategically took the foundation to new heights; as CEO, she excelled at fundraising, organizational leadership, strategic planning, community outreach and mentoring other local nonprofits in their pursuits of scaling and sustainability.

Angie is also a founding board member for TVNPA. She currently is a consultant in the Nonprofit sector assisting nonprofits in their own pursuit of success. In her spare time, she splits her life between Pleasanton and Boise ID, always coming back home to the Tri-Valley to see her two granddaughters Ryann & Drew.

Chris Carter was appointed as the Executive Director of Livermore Valley Arts in February of 2020. He led the organization through 14 months of closure and helped to secure its first ever estate gift along with multiple public grants and donations while working within the limited constraints of the pandemic.

Chris has led and participated in multiple professional workshops on fundraising, strategic planning, event strategies and volunteer board management. An avid guitarist, Chris has performed steadily in the community for the last 25 years with his band mate, Mike Lickiss, as a member of the LK Project.  Chris lives with his wife and three children in Pleasanton, and has been a volunteer for the Boy Scouts in various capacities over the last 12 years.

Christine has flourished in the non-profit sector for over 25 years and began working at Tri-Valley Haven in 2001. She received her BA from Brandeis University and her MBA in Finance from the University of California, Davis. Christine has been on the board of directors of the California Coalition Against Sexual Assault (now Valor) and the Tri-Valley Nonprofit Alliance (TVNPA). She was President of the Women in Leadership at the University of California, Davis Graduate School of Management. Christine now serves as Treasurer of the Board for TVNPA. Christine’s lifelong passion is ending violence against women and children.

Susan has been on the founding board of directors for six nonprofit organizations – including the Tri-Valley Nonprofit Alliance and the Las Positas College Foundation.   Locally, she’s well-known as the founder of Sunflower Hill, an organization creating spaces and places for individuals with special needs — for which she received Pleasanton Weekly’s individual ‘Role Model’ award in 2014.   She is the co-founder and board secretary of Three Valleys Community Foundation, a new geographically-based organization that began operations in 2021. She also works as a consultant and program manager for the Livermore Lab Foundation.  Susan is a Certified Fundraising Executive (CFRE) and a Candid Certified Trainer. She has a BS in Journalism from California Polytechnic State University at San Luis Obispo and a MS in Nonprofit Administration from Louisiana State University. In 2016 she was named to the Cal Poly Journalism Hall of Fame for her role in philanthropy, journalism, and community public service.   She loves all things Tri-Valley and lives in Livermore with her husband Larry.

Carolyn Siegfried, fourth generation Californian and Livermore resident since 1988, has been the Executive Director of the Pedrozzi Scholarship Foundation in Livermore since 2013. She previously held management roles at other local nonprofit organizations including Hope Hospice in Dublin and St. Charles Borromeo Catholic Church in Livermore. She has also produced and hosted a variety of shows for Tri-Valley Community Television (TV30), including moderating local election forums. Her early career was spent in high-tech marketing in the Silicon Valley. She earned her MBA and General Engineering degrees from Santa Clara University.