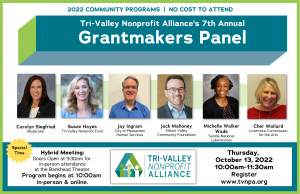 TVNPA is pleased to bring back our Grantmakers Panel, featuring local foundations, city & corporate representatives discussing their grant requirements and charitable giving programs. This popular event is not to be missed by nonprofit staff members, board directors, and volunteers seeking an in-depth understanding of how grants are funded.

Panelists will shine a light on their giving criteria and organization requirements, along with providing information on how to form partnerships with grantmakers and apply for grants. Representatives include:

In this panel discussion, speakers will share grant requirements and insights on nonprofit funding as well as address questions from attendees at the program. Moderated by Carolyn Siegfried, Executive Director of the Pedrozzi Foundation and  former TVNPA board chair, take advantage of this unique opportunity to hear grantmakers’ tips and pointers about their grant processes.

We all know that grant writing often involves multiple people in an organization, so be sure to encourage your colleagues to also register for this informative discussion and enriching morning of networking and community-building

Please note: this hybrid program has a special start time of 10:00am PDT.

Carolyn Siegfried, fourth generation Californian and Livermore resident since 1988, has been the Executive Director of the Pedrozzi Scholarship Foundation in Livermore since 2013. She previously held management roles at other local nonprofit organizations including Hope Hospice in Dublin and St. Charles Borromeo Catholic Church in Livermore. She has also produced and hosted a variety of shows for Tri-Valley Community Television (TV30), including moderating local election forums. Her early career was spent in high-tech marketing in the Silicon Valley. She earned her MBA and General Engineering degrees from Santa Clara University.

Susan has enjoyed 25 consecutive years of community involvement in the Tri-Valley, dedicating time as a volunteer and board member to over 20 regional organizations and civic committees. She spent the first six years of her professional career as a paralegal, eventually moving into journalism, where she spent 12 years- nine of which as the weekly columnist for Around Pleasanton for Bay Area News Group.  For the past 15 years she’s worked in nonprofit management as Coordinator of the Tri-Valley Educational Collaborative, Auction Coordinator for Auction Napa Valley 2012, Executive Director of Pleasanton Partnerships in Education Foundation, and Interim Executive Director of the California Main Street Alliance. She presently runs her own nonprofit and communications consultancy.

Susan holds a BA in Political Science from UC Davis and an MS in Organizational Development from University of San Francisco.  A resident of Pleasanton since 1991, she is the proud mom of two young adults, Sarah and Grant, and a spunky Jack Russell Terrier Mix rescue dog named Finley.

Jay Ingram is a Recreation Manager, Human Services, within the City of Pleasanton Library and Recreation Department. Jay has worked in this capacity for five years. Part of his responsibilities is working with the many Tri-Valley human service nonprofit organizations. This work is focused on annual grant funds authorized by our City Council, with the intent to help our local nonprofit human service providers build capacity to serve Tri-Valley residents with a variety of needs. During the pandemic Jay was able to work alongside many of our service providers, all of whom filled very important gaps in human services. While the pandemic has been challenging for everyone, Jay has drawn strength from watching our local nonprofits work efficiently and effectively with each other for a common good.

Jack is the Director for Movement- and Power-Building at Silicon Valley Community Foundation. He joined the foundation in early 2018.

Since joining SVCF, Jack has spearheaded several civic engagement initiatives across the organization. He led SVCF’s support to implement the California Voter’s Choice Act in Silicon Valley and worked with government partners in the City of San Jose and San Mateo County to establish voter engagement funds. Jack believes it is vital to support BIPOC leaders in order to advance systemic change and build long term power in communities of color. He looks forward to engaging in that work through his leadership of SVCF’s Movement and Power-Building grantmaking strategy.

Early in his career, Jack worked as an organizer on progressive campaigns across the country and brings lessons from his experience into his work today. More recently, Jack worked in the international development field to promote good governance. He spent over five years at the Open Government Partnership, an international initiative started by the Obama Administration to bring governments and civil society together to build more transparent, accountable, and participatory institutions. He held a variety of roles at OGP, rising to become a Program Officer focused on supporting governments in the Asia-Pacific region.

Jack holds a MSc in Public Management and Governance from the London School of Economics and a BS in Religious Studies and Political Science from Santa Clara University.

Michelle Walker-Wade is the Community Relations Specialist in the Communications & Marketing Department at Sandia National Laboratories in Livermore, California.

Charan Sue (Cher) Wollard’s award-winning poems have appeared in literary journals and anthologies including the Carquinez Review, The Gathering, Joys of the Table: An Anthology of Culinary Verse and Bird Black as the Sun: California Poets on Crows and Ravens.

She studied with Santa Cruz poet Ellen Bass for two years, and has participated in workshops with Stephen Dunn, Tony Hoagland, Marie Howe, Dorianne Laux and other distinguished poets.

She was poet laureate of Livermore, 2009-2013, and has served on the Livermore Commission for the Arts since 2014. 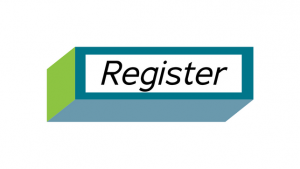