In Conversation with Tri-Valley Mayors 2022 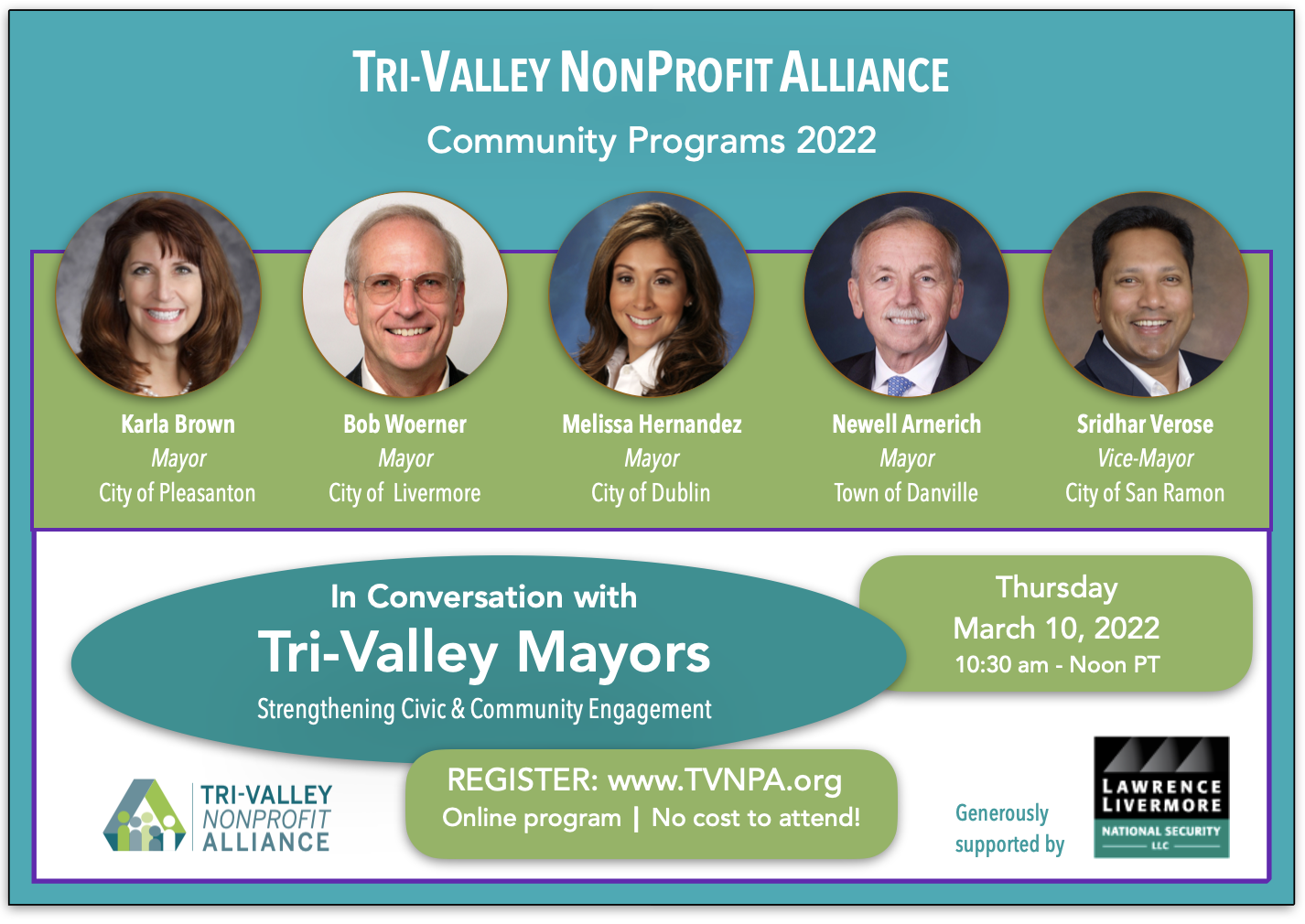 Join TVNPA online to explore ways to foster civic and community engagement at an in-depth conversation with Tri-Valley Mayors . Featuring the mayors of Danville, Dublin, Livermore, Pleasanton, and the Vice Mayor of San Ramon, we will focus on how strengthening the relationships between cities and local nonprofits can benefit the entire region. Learn more about our city leaders’ projects and plans and how we as nonprofits can best work together with city leadership.

Mr. Newell Arnerich is a seven-term Mayor of Danville over the past 27 years while serving on the Danville Council. He serves on a variety of local and statewide committees. He is a director at several Innovations/start-up incubators in the USA and China. Mr. Arnerich, a CEO/Co-Founder, is a successful entrepreneur, professional architect and urban planner with offices in San Francisco Bay Area and Los Angeles. Mayor Arnerich serves as a director on the Contra Costa Transportation Authority (CCTA). He also serves as a director on several high-tech startup innovation centers such as The Launching Pad, VLP, i-Gate and VillageUp. Mr. Arnerich earned Bachelors & Master’s Degrees in Architecture & Urban Design from U.C. Berkeley. He has published over 50 articles on governance, leadership and economic trends. He has guest-lectured at Stanford University MBA International Classes, UC Berkeley College of Letters & Sciences and other institutions. Mr. Arnerich serves on the boards of several public and private companies in the USA and Asia and has strategized the sale of several private companies. Newell is married to Janis Arnerich, an Educator and Elementary School Principal in San Francisco Bay Area school districts. Together, they have two children.

Karla Brown is serving her first term as mayor for the City of Pleasanton, after serving eight years on the Pleasanton City Council. As mayor, she serves on multiple regional and city committees and will focus her goals on: COVID-19 support and relief; drinking water quality; Smart-Housing; preserving heritage buildings; and supplementing police services with mental health professionals. She has been extensively involved in civic and residential committees and was a leader in ballot measures and referendums Measure PP and Measure D, successfully winning their passage as supported by Pleasanton voters. Mayor Brown has volunteered at many local nonprofits, including Culinary Angels; Tri-Valley Conservancy; and Hively. She earned a B.S. degree in Business & Marketing from San Jose State University and also holds a Broker’s License.

Melissa Hernandez was elected mayor of the City of Dublin in 2020 after serving on the Dublin City Council since 2016 and as vice mayor since 2018. Prior to her election to the city council, Mayor Hernandez served as chair of Dublin’s Human Services Commission. She has also served on several committees, including: Alameda County Waste Management Authority; DSRSD Liaison Committee; DUSD Liaison Committee; East Bay Community Energy JPA; East Bay Division of League of California Cities; Federal and Military Communities Committee; Valley Link; and Livermore-Amador Valley Transit Authority, Professionally, Ms. Hernandez has served as a top legislative aide in Health Care and Social Services to Alameda County Supervisor Scott Haggerty and currently serves on the transition team for newly-elected Supervisor David Haubert. She has nearly three decades of experience as a small business manager in the dental and health sectors. She received a degree in Political Science, Public Affairs & Administration at California State University, East Bay.

Sridhar Verose was elected to the San Ramon City Council in November, 2020. A 15-year resident of San Ramon, Mr. Verose lives with his wife Sucharitha and two children. He has a lengthy background of civic and volunteer work in the area and is deeply committed to the City of San Ramon and its residents. He was appointed to the San Ramon Parks and Community Services Commission in 2016, serving as Chairman in 2020. Councilmember Verose graduated with a Master’s degree in Software Engineering from San Jose State University. He has been working in Information Technology for the past twenty-five years. He is currently working as Senior Manager for Cloud Operations at a software company. As a San Ramon resident, Mr. Verose has participated and volunteered extensively in numerous civic and community committees, service organizations and community projects.

Bob Woerner was elected Mayor of the City of Livermore in 2020 after serving first on the Planning Commission and then on the Livermore City Council from 2012-2018. Bob spent the early part of his career as a physicist at Bell Labs and the Lawrence Livermore National Laboratory. Over the past 36 years, he has also worked in leadership positions in the banking, telecommunications, software, business consulting, and energy utility industries. Bob recently retired from PG&E as a Senior Director in Electric Operations. Bob has two adult sons and is married to Nova Starling, a local artist and president of an educational nonprofit. Bob has an MBA in Finance from UC Berkeley and BS, MS, and PhD degrees in Physics from MIT. He also served as a Captain in the Air Force Reserve.